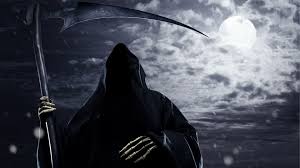 In Aka village our most dreaded enemy was iku. The one we fought with all that we had. We have had other enemies at different times but they were all defeated. This one is extremely powerful. He and his army from the kingdom called Aye were fierce and had no mercy.  He wore on him the hat of darkness and walks about rarely in his visible body. The day I saw him I was left trembling. My eyes ran inside of my body and I became entirely white. His head had no form and his eye sockets had no balls. His nose was rotten and housed many maggots. His mouth constantly dripped with thick blood of his prey. He had a rod in his right hand from which he tears the soul away from the body. He is the symbol of wickedness.

I haven’t forgotten seeing Ajoke struggling as she entered into the labor room. She was finally going to mother a child. You needed to have seen Sola, her husband as he paced about and couldn’t believe what was about to happen to him. Twelve years of childlessness is enough trouble of a lifetime. But all were soon to be over as Sola heard the cry… Wueeeen Wueeen. That’s my baby! That’s my baby! Sola screamed in excitement and ran into the room like a mad dog. He couldn’t help it as tear drops rolled down his cheeks as he caressed his child’s forehead. No one was aware that our vicious enemy, iku was hanging around. Just before sunset arrived, iku put two fingers into the boy’s nostrils and suffocated him. He laughed in ecstasy as he watched thick liquid mixture forcefully tear his body and appear on the outside of his mouth and eyes. He laid him motionless and covered himself with darkness as he breezed away from the room. Do I have to tell you what happened as a result of iku’s cruel wickedness? I only should add that Ajoke breathed her last that day.

On the day of coronation of our new king, we were all singing, dancing, drinking and eating. Women, men children all gathered outside the king’s palace. The king went into the power house to take the staff and the crown as our custom was. Right there he met the enemy hiding in a room. King Ajibade had no chance. Iku lifted him up and smashed him against the wall. His bones shattered and so did our celebrations in Aka. Wailings, tears, sobs, regrets to mention only a few. 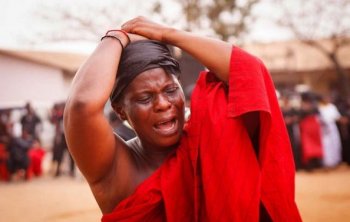 Balogun was our greatest warrior. He went into the forest of iku to fight the great enemy. One helmet, two breast plates, three choice swords, five spears, fifteen arrows, eight guns, plenty charms and a thousand soldiers trained from birth. Iku had recently killed his last wife making the total casualties in his household seven – three wives and four children. After two hours of combat, the enemy emerged from the forest. There were blood stains all over his mouth as he tore the remaining flesh from Balogun’s bones. He looked very pleased as he roared with an awful and wicked voice. That roar would bring thousands upon thousands of his soldiers from Aye.

Without Balogun and the fallen one thousand, we were left with two hundred soldiers and Kuye to lead them. The fear that gripped us as iku challenged us again to a fight was visible; it was thick; it was heavy… I grabbed my travel sack and ran just like every other living creature in Aka. Even the wall geckos did not wait, every foot was in motion. But our feet couldn’t carry us too far. All of us ended up in the mouth of either iku himself or his soldiers. I was the last to be destroyed by the wicked monster. His sharp and horrible teeth were dripping blood and were drawing close. My neck was pinned strongly to the ground. With the last strength I had, I cut my bands loose and struck iku in the heart. As I watched him fall on his back I shouted Yeeesss!! Yeeesss!! I have done it!!!

Suddenly Ajibola woke me up from sleep. I was dreaming. I told my dream to everyone in the camp with pride. When Kuye heard that I killed Iku in my dream he told me that confirmed the prophecy that I was chosen by the gods to confront the enemy who had been asking for a man-to-man combat. Every other soldier nodded in agreement with Kuye. The following day I was arranged to fight Iku in the valley. As the combat bell rang into my ears, I bent down low, looked for an exit and took to my heels. No human being or animal on this earth could catch me on that day!